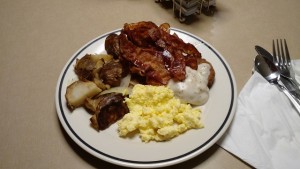 My Breakfast at Eureka Casino Buffet

On the way back to the motor home, we saw a group of ATV riders getting ready to go out for a ride. Most of the license plates were from Idaho. They were all our age. 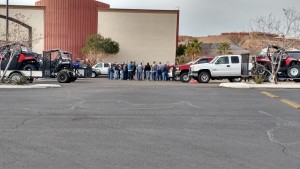 We drove into Las Vegas. I pulled off to fuel up at Pilot, but there was no way to get into the gas pumps. Turned around in the truck area. The GPS took us 6 miles through town to US-95. We took it to Russel Road, then turned off and went east to Boulder Highway. Stopped at the Camping World in Henderson. Best Camping World I’ve ever been in. Shelves full, every thing in the catalog in the store. Bought a replacement faucet for the outside shower that is leaking. Also bought a couple of sewer adapters. I’ve been looking for a cap with four hooks instead of two or three, found one made by Valterra. Also bought a 3″ to garden hose adapter. The Jeeps tires were down, especially the passenger side rear. Got the service area to let me use an air hose to fill back up. 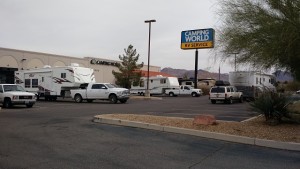 We left Henderson and headed down US-95 towards Needles, CA. We were looking for a place to fill with gas. Search Light, NV and Needles, CA were too expensive. In Needles we saw a sign for Pilot at the I-40 exit we were going to be taking to get to Lake Havasu City. The price was $2.04/gal. US-95 in California is like riding a roller coaster. 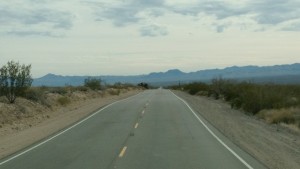 US-95 in California Near needles

We got to the AZ  9 Exit to AZ-95 and the Pilot Station. The price was $2.06/gal and the pumps were still hard to get to. Across the street was a Love’s. Gas was $2.07/gal, but they had RV Gas islands. Very nice, I will pay an extra penny per gallon any day to get RV islands. Also washed all the crud off the Jeep windows.

We drove on and got to the Havasu Falls RV Resort a little after 4:00PM. Very nice. We are in pull through number 18. I replaced the outside shower faucet and dumped the garbage in their trash compactor.

Watched the President’s State of the Union Address.

One reply on “Tuesday January 20, 2015 Mesquite to Lake Havasu City”