The over night low at Quartzsite was 49F and the high at Imperial Dam was 71F. It was mostly sunny all day.

We left Plamosa road at 11:00AM. Alan is coming with us to Imperial Dam. I stopped in Quartzsite to fill with propane at $2.29/gal. Then stopped at Plamosa South to purchase 2 week LTVA pass. Went to the dump site to dump, but after waiting 15 to 20 minutes, it was evident it was going to take a long time. Decided to dump at Imperial Dam.

Set out on US-95 south and stopped about half way at Stone Cabin. I bought Ice cream for Cathy, Alan and myself. I mentioned to Randy that he wasn’t open last year and he said he was out with a detached retina. There were several there getting hamburgers that really smelled good. 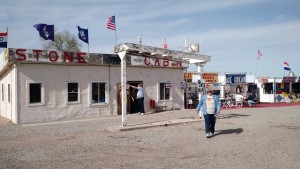 After the ice cream we continued on. We stopped at the dump station when we got to Imperial Dam and dumped immediately. We then filled with water and headed to Ocotillo Flat. When we got there we saw that Bob & Doris, Bob & Jane, Lynn & Sandy, Dennis & his son, Bill & Lana and a new to us couple Jim & Lucy were already there. Lynn & Sandy have a dog named Oscar and Jim and Lucy have a dog named Chloe.

Alan and I got the motor homes set up and were ready for Happy Hour at 4:00PM. Happy Hour was at Jim and Lucy’s. Lucy had jalapeno jelly with cream cheese and crackers. It was really good. There was also nuts, chips and guacamole.

After Happy Hour, Alan and I, drove over to Bard to check mail. Didn’t have any yet. The Jeep quit charging again as we left for Bard.

When we got back from mail check, I set up the TV. We are now all settled in at Imperial Dam for two weeks.