We awoke to a beautiful sunny morning. 34F overnight. Except for the drag racing in the part for an hour after midnight we spent a restful night at the Fort Morgan City Park.

I took Joy for a walk in the park to see the ducks and geese. She found them quite interesting. 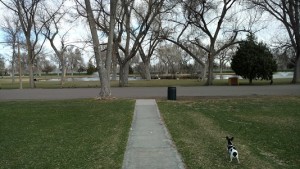 Got to the Elk’s Lodge in Boulder at about 12:40PM. They have 8 RV sites behind the lodge. $15/night. There aren’t any RV Parks in Boulder.

Got parked and went in and payed. at 3:00PM we left for Mt Zion Lutheran Church for rehearsal. It was very in formal and we left after awhile and drove downtown to the Boulderado Hotel. There weren’t any parking spaces anywhere , even for cars, let alone a motor home. We saw a Parking Control agent giving out a ticket and stopped an asked him where we might park. He said in the residential area west of downtown. He said to follow him. He took us to the Catholic School and had us park in front of it.

Walked down to the Bouldrado Hotel where the drinks and appetizers were being served in the License Number 1 bar  named for having the first license in 1909 after Boulder was made dry in 1907.

The hotel staff helped get David in through the kitchen and won the service elevator to the basement where the bar was. From there it was one drop of one stair and another drop of two stairs.

The appetizers and drinks were exceptionally good. I had a gin and tonic and a local IPA beer, Modus Hoperandi from SKA Brewing in Durango, CO. I had mostly brats from the appetizers.

A little after 7:00PM Jay and Becky took me to the motor home and I drove it down to the Boulderado Hotel. We then went out to the Marriot where Jay, Jeanne and Alison were staying. Jimmy went out for pizza.

We got back to the Elk’s Lodge about 10:30PM and parked the motor home again.