We left Walmart at about 10:00AM and got out on I-90 and stopped at Flying J to fill with gas. Drove on to Grand Island and Cathy drove from there to Yankton, SD. As we neared Kearny, there was a huge Archway over I-80. 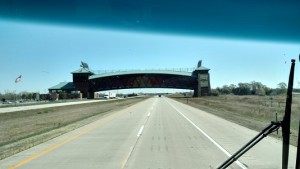 From Grand Island to Columbus was two lane. I took over again at Yankton and drove the rest of the way. The scenery was nice all day. Lots of green grass and pretty farms.

Stopped at Flying J in Sioux Falls for gas. As we were leaving, the Propane Alarm went off. I wasn’t too surprised as we were parked beside the propane pump. Moving however,  made no difference. When I went to turn on the fan I found we had no 12 volt power. The alarm was sounding because of low voltage. I had noticed that last night the inverter was pulling the battery down.

We stopped at the Burger King across from the Flying J and got dinner which we ate on the move. I was able to get the generator started and let it run to enable the converter to charge the batteries.

I let the generator run all the way to the Dakota Sioux Casino where we are spending the night. Parked in our normal spot and Cathy went in to register. Put the jacks down and put the slide out. Went out to plug in the shore power and the power pedestal was clamped shut. Looked on line and they mentioned they had opened their new RV Park on the south side of the casino. Cathy registered us for space 7 at $5.00/night. Only two other campers here, both from Manitoba.