Nice sunny morning, only 34F, but sunny. It rained over night. We parked next to the catch pond and there was something in it making noise all night. Sounded like millions of crickets.

Went into Walmart and got some apple fritters and candy. We left Norfolk, NE at 10:15AM. We took US-81 South untill we got to US-30. We took that to US-281 which got us to I-80. We stopped in Grand Island for gas at Pilot. It was a very fancy Travel Center. Filled with gas for $1.86/gal after discount. Stopped in and filled the PhilMors and bought some chicken tenders. They had a lot of interesting things like old Sinclair Pumps, Dinosaur and Horse Drawn Gas Wagon. 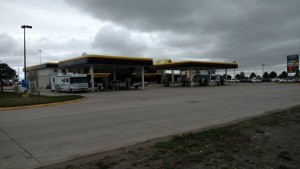 Cathy drove from Grand Island to Kearny. It was very windy. I drove the rest of the way. We stopped at the Colorado Welcome Center. They suggested we park at the City Park in Fort Morgan, CO. She said she thought the first night was free. The have electric hookups. We stopped at the Walmart on the east side of Fort Morgan and Cathy got a frozen entre’ for dinner. Not all electrical hookups were 30 amp, but I did find one. We drove 436 miles today. We still have 100 miles to go. We plan on staying at the Elk’s Lodge in Boulder. Cathy called this afternoon. They have 7 spaces and only one is occupied. She said it was muddy though. Hope to get to the Elk’s Lodge between 11:00 and 12:00.

Jay called as he passed Fort Morgan. Alison and Jimmy were way back on the east side of Nebraska. Jay posted on Facebook that they were at the hotel by the airport.